And also, the neighbor –

was cleaning up the beer-and-BBQ debris, followed by

a tiny white kitten, whom, when questioned about this tiny fur person,

despite the fact (which he already knows full well)

that I already possess four kitty people who all call me mom, AND

to my shocked gaze, ensuring the little fellow would be able to (instantly) claim a new mama.

also, he stands in the food bowl, frantically kneading the kibble,

purring madly while scarfing  bikkies as fast as he can,

because he is unsure if the food will last, like a shipwreck survivor, which

My neighbor across the lawn rescued three calico female kittens from a dumpster, and I took photos, made up a flyer and posted it at our 400+ student school, hoping to help get them adopted out. No such luck. Not a single nibble. So, I took one.

She is a cute little seven-week old, frisky and loving little lady, who attacks my hand in play fights while I am reading on the couch, and then licks the places she play bites in apology. She’s such a sweetie I named her Dulce – the Spanish word for sweet. She and I are getting along just fine. Caruso, my man-kitty buddy, a chunky, handsome tiger-striped brown boy, is fascinated with her and wants to play – but he’s a little big and she is scared of him still. So, he contents himself with lying nearby and watching her antics. Fez, my champagne and white regal lady kitty, is disdainful, but she contents herself with growling under her breath, and occasionally hissing as she strolls majestically past the little interloper.

The problem is Fluff-man. He is INSANELY jealous. Whenever he spots her, he distorts his handsome kitty face with the evilest-looking hiss (issued repeatedly), and he growls so furiously and loudly at little Dulce that it is almost howling. You can hear his mental wheels turning loud and clear – that little s*&$ is getting pets from MY MAMA, and I HATE HER GUTS. I came home from work yesterday to find Dulce mewing piteously, sitting forlornly on top of the drapery rod, just beneath the ceiling, where she had obviously climbed to escape Fluff-man’s furious swats.  Fluff outweighs her 10 to 1, so this is a real issue for the little girl.

Today, I set her up with food and water bowls and a private kitty potty in the unused second bedroom, and I shut the door. Her ”I am abandoned” wails were difficult to hear, but I’d rather she be a little lonely than hurt. My unrepentant, furious Morocco boy kitty is acting like a Muslim meeting a Jew for the first time. It’s not pretty.

I am hoping that time will temper the fury and I can convince Fluff that this new little furry face does not mean I love him any less.

I have cats who share my life. I am not sure who is the owner and who is the pet in these circumstances, but I am the one scheduling doctor visits and buying the kibble and litter, not to mention scooping the box, so in MY opinion at least, I qualify as…caretaker, at least, if not actually the OWNER.

Last night, as I left my room’s door open to catch the evening breeze (the fact that one fur child was already cozily bedded down on the cushy rug was definitely, definitely NOT a factor), I was fairly certain that I would be visited inside my mosquito netting by one or more babies who, being far more nocturnal than yours truly, would visit therein in hopes of getting some mommy loving. Sure enough, Fez came by, settled on my chest and tummy, began making gentle bread on my cushy abdomen, and settled down for lazy stroking from me. She signaled her approval by occasionally licking my leg with her sandpaper-rough tongue. When she 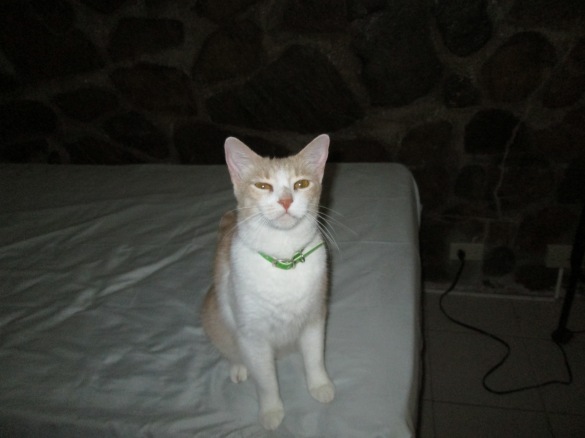 had enough pets to satisfy her, she ambled off the bed and went to find a cooler spot to spend the night. She likes sleeping on mommy only in the chilly winter – which does not exist at sea-level Panama.

Later, Fluff-man came by, settled in a warm, furry ball beside my ear on the pillow, and began rumbling deep in his chest, vibrating my ear drums with his hypnotizing purr. He then reached over with both front feet, and made bread on my shoulder, more forcefully than Fez does, being a man-kitty-type person. Any parent will tell you that it is very nice when your children spontaneously come and love on you, and kitty parents are no exception. It’s nice, even when it is the middle of the night.

Now if only my human children would send a message…….

My husband adores silly movies. Slapstick comedy is his forte. His favorite actors are Will Ferrell, Adam Sandler, the Three Stooges, and the like. These movies really are silly, stupidly funny ones. However, they are ‘generally’ safe to watch, in that there is seldom nudity, and usually not too much cussing. It is really hard to find a movie that does not contain bad stuff.

Someone once told a story about a wise mama, who would not allow her youngsters to watch movies that contained bad content. The kids whined and pleaded that there was just a little cussing, or just one bad scene in the whole two-hour long movie, so it wasn’t really bad, you would hardly notice it! She got tired of this, so she decided to teach her kids a lesson. She waited until one Friday night, when the kids had free time to watch a movie, and she let the whining and pleading begin – and then, she brought out a platter of brownies.

She explained to the kids that she had made these brownies just that morning, so they were fresh and sweet. She explained that she used the finest ingredients: sugar, chocolate, fresh butter. There was just one thing – in the batter mix, she had mixed in a little of their dog’s poop. At the kid’s horrified expressions, she calmly protested: it wasn’t much, considering how much batter there was, you’ll hardly notice it – it was just a little bad stuff! None of the kids would touch a single brownie.

Then she pointed out to the kids that the dog poop brownies and most of the movies they were asking to watch (that she was telling them were not good) were one and the same. A little bad DOES ruin the whole batch. She did not have to put up with much whining about the movies after that – they kids got the message. And all it cost was one package of brownie mix.